Each piece of cocoons has a story that the silkworm worked hard to create.
In the past, workers at a silk mill named the cocoons that couldn't be drawn until the end of the process of manipulating cocoons "Kobore Mayu" out of love for them.
There is no superiority of people or natural materials.
Up until now, only uniform and beautiful products have been selected and used, but we pay attention to the "spillovers" and the kindness with which we create products with a "shape" with love and affection, which leads to a heart that cares for people and things. 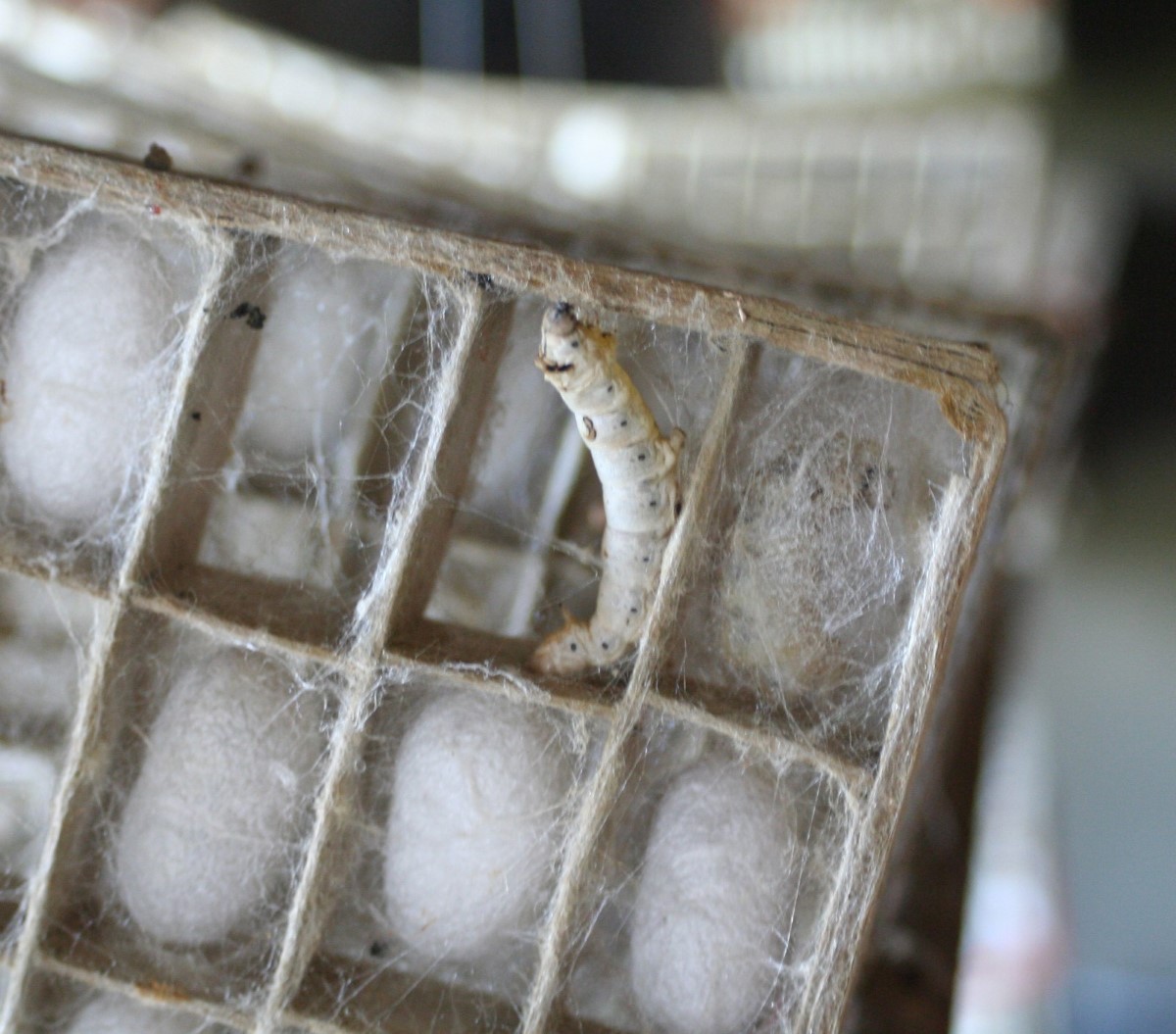 "Gikakumayu", a leather-like silk made from cocoons produced in Tomioka, Joshu, was born.
We named it "Gikakumayu" in imitation of leather.Even expensive domestic raw silk, which has now become a scarce commodity, can be used to produce this product, but we focused on raw materials that are not used industrially and decided to make effective use of them. We named the cocoons that cannot be pulled until the end of the operation of raw silk from cocoons "Koboremayu". We are developing leather substitute products (small leather goods) using all kinds of hand-reeling silk for experience at Tomioka Silk Mill, "Kibiso" and "Degaramayu". 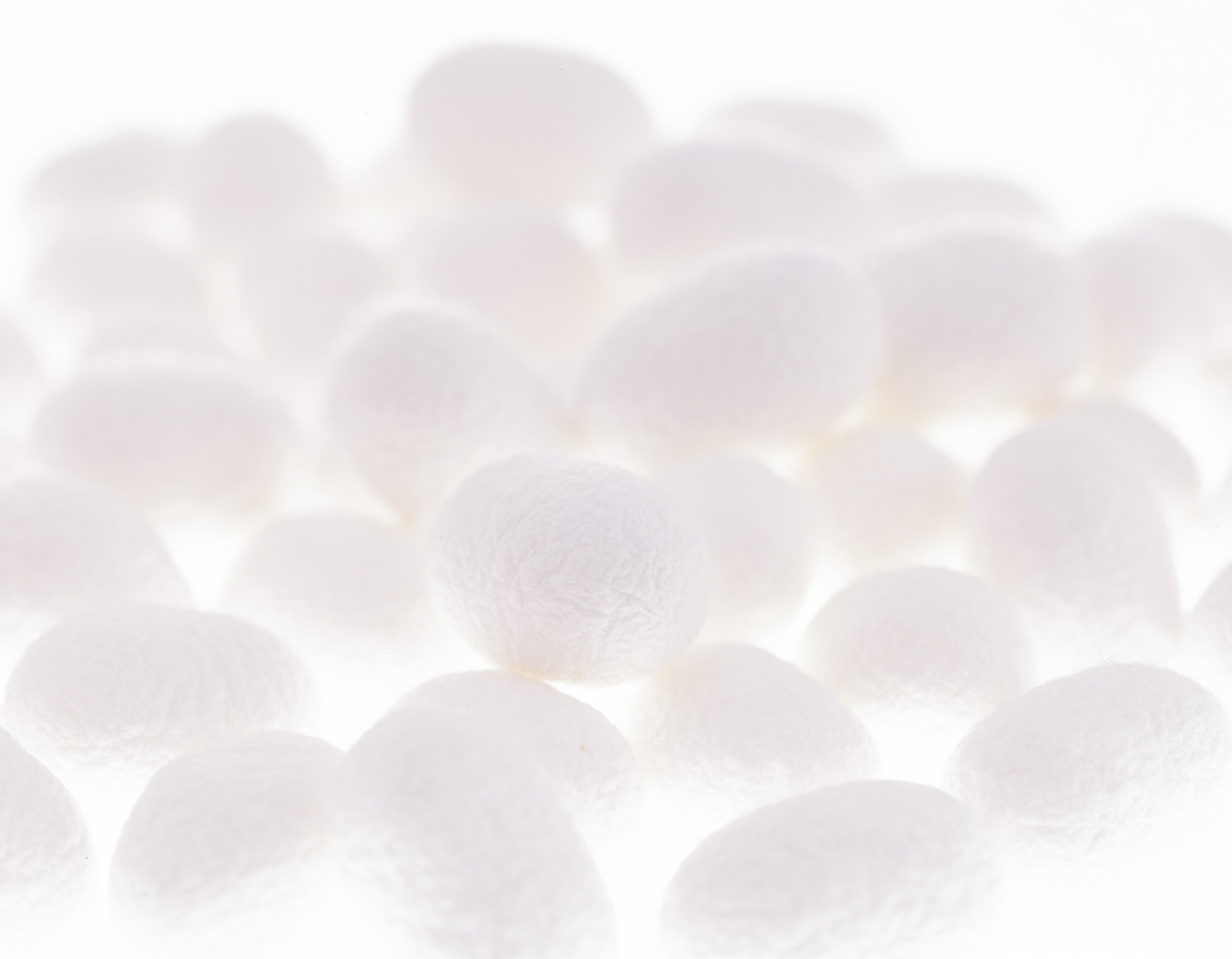 We are convinced that our pseudo-leather products made from cocoons (silk) demonstrate the potential of silk as a new use and lead to ethical consumption. In addition, we believe that the use of raw materials that are not normally used industrially also fits with the SDGs commitment to waste management. 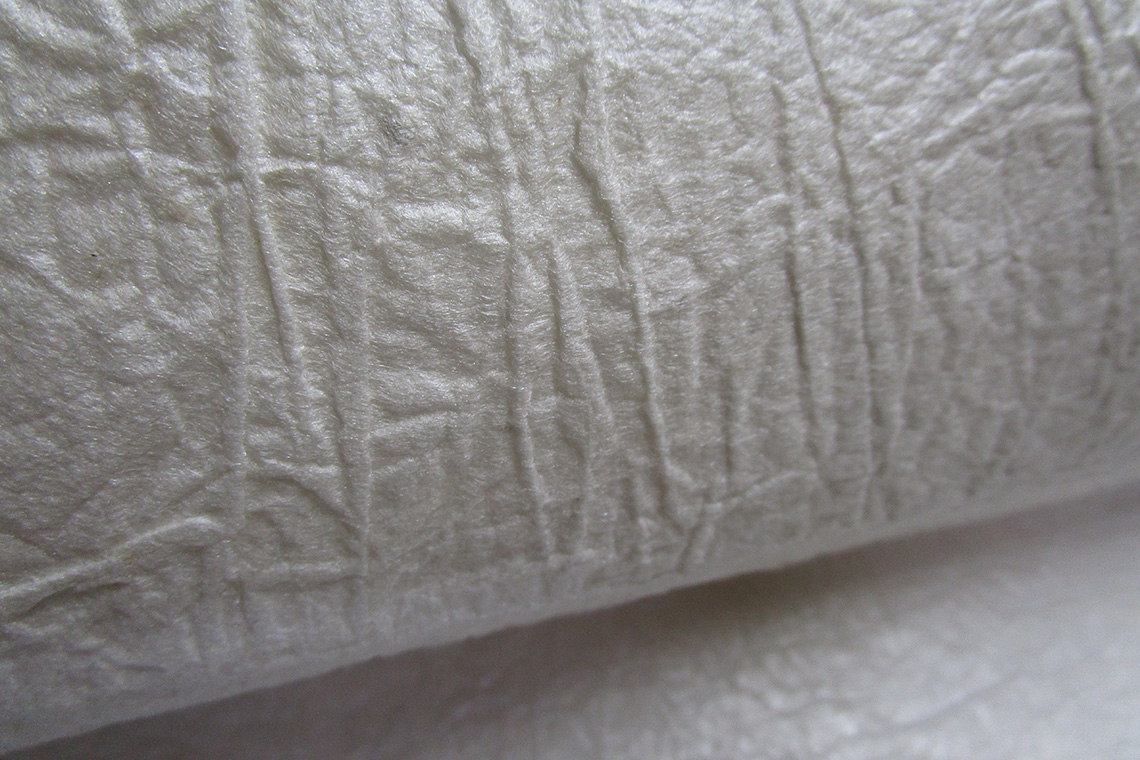 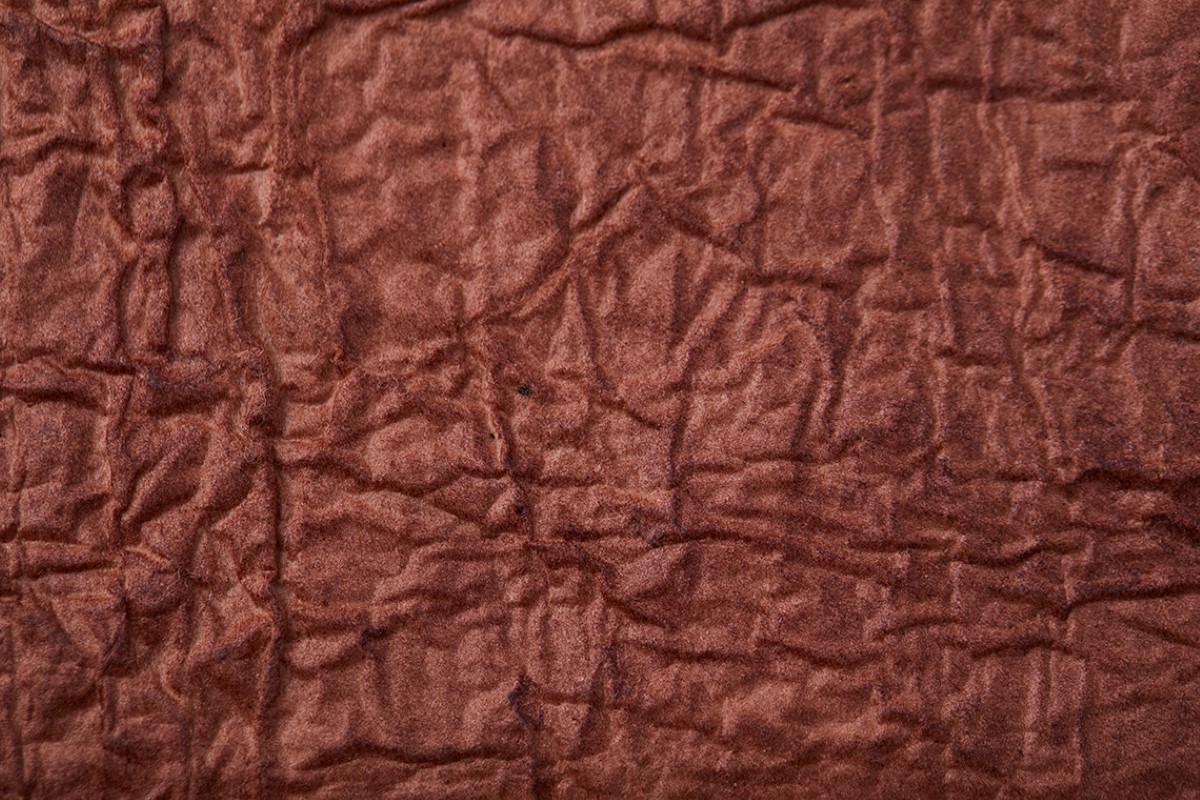 "Gikakumayu"'s main characteristic is that the material is the cocoon itself. Cocoon (silk) not only protects the life of silkworm chrysalis from environmental changes and external factors, but also quickly releases the carbon dioxide that the chrysalis breathes in and takes in fresh oxygen. These functions are inherited by silk, which is made from cocoons and has a structure very similar to the proteins that make up human skin. Because of its role as a "Life Support Device", the fiber has various features that make it gentle on the skin.

About 20 years ago, when my father was engaged in joint research on microorganisms attached to cocoons with the National Institute of Silkworm Fibers and Insects (now the National Institute of Agrobiological Sciences), a professor gave me a book titled "Research on the New Use of Silkworm Cocoon Species".
From the early Showa era to the end of World War II, materials were developed to replace cotton and wool, which were difficult to import from foreign countries, and leather, which was difficult to obtain domestically, with cocoon yarns and raw yarns, and a number of materials were put to practical use. The use of domestic tegus, Cocoon feathers, flat cocoons, silk wool raw silk, special raw silk staple, recycled silk thread, and new products made of silk are introduced in this book.
In the book, there were only five lines about the "Silk Leather Manufacturing Process". For some reason, I was fascinated by these two words, "silk leather".The explanation was "cocoon layer or silk waste is made into a fine combed cotton wrap, and glue made of adhesive is applied to it...". The explanation is not too much, but it is said that leather can be made from silk. This was researched 75 years ago (in 1944), and how to make "silk leather" became my theme.
We believe that we need to be a little more cautious about the use of domestic raw silk if we are going to make products with the burden on the global environment in mind.
Nowadays, consumers may not be very impressed by expensive domestic raw silk, which is very rare and valuable, even if it is made in Japan.
In general, I think these stories of manufacturing empathize with the nostalgia of things that have been abandoned or forgotten technologies.We thought it would be possible to use relatively inexpensive sub-silkworm yarns and other materials for manufacturing.However, what should be done to procure the sub-silkworm yarn in the present situation where it has become difficult to obtain the raw material for cocoons (e.g., a sharp decrease in the number of silk mills and sericulture farms)...My family has been in the yarn and cocoon business for more than 100 years since my great-grandfather's generation.Because of this, the volume of trade with the silk industry in Japan has decreased, but the sub-silkworm yarns are still available from various silk companies in Japan.However, thinking about the future, we were in a hurry to get the circulation of cocoons (silk) material back on track as soon as possible, so we kept making mistakes.It was last year that it finally started to take shape, and now [Cocoon Reborn] was born. The time has come to make Re, such as Reduce, Reuse, and Recycle, the key word for a recycling society. Reduce: Don't buy useless things, don't produce waste, and use the things you buy for a long time. 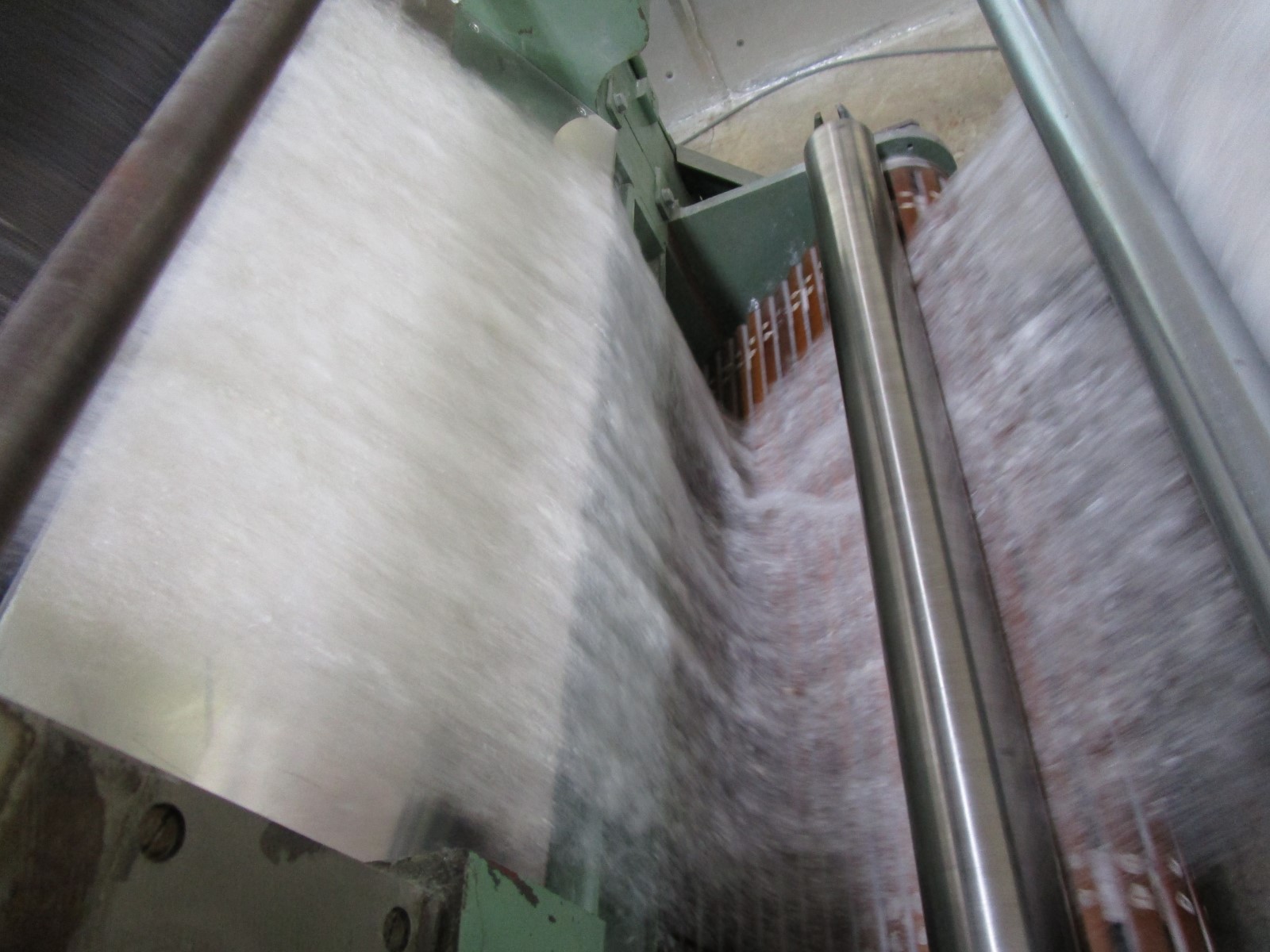 There was an absolutely essential machine to promote [Cocoon Reborn]. The name of the machine is "Carding machine". This carding machine was originally designed for carding short fibers such as wool and cotton, and was originally not suitable for long fibers such as cocoons (silk). (Long fiber cocoon yarns would get tangled up in the drum of the carding machine.) In early February of last year (2019), when I was about to give up halfway through the winter, I accidentally found a golden ratio while merging several kinds of sub-silkworm yarns and making cards. Since then, I have been able consistently to produce pseudo-leather.

What's next for the staining? What dyes are most compatible with "Gikakumayu"? The answer to this question was obvious from the beginning. The answer was persimmon tannin. The tannin of persimmon works as an astringent agent to fix the protein of cocoons. Cocoon and persimmon tannin are really good companions. Feel the gentleness of the color of persimmon juice dyeing and the warmth of the texture of cocoons (silk). Even if you use the same dyeing method and the same amount of dye, the texture and feel of the finished fabric is slightly different for all of them, which is exactly why they cannot be the same. This is the strange thing about "Gikakumayu"... 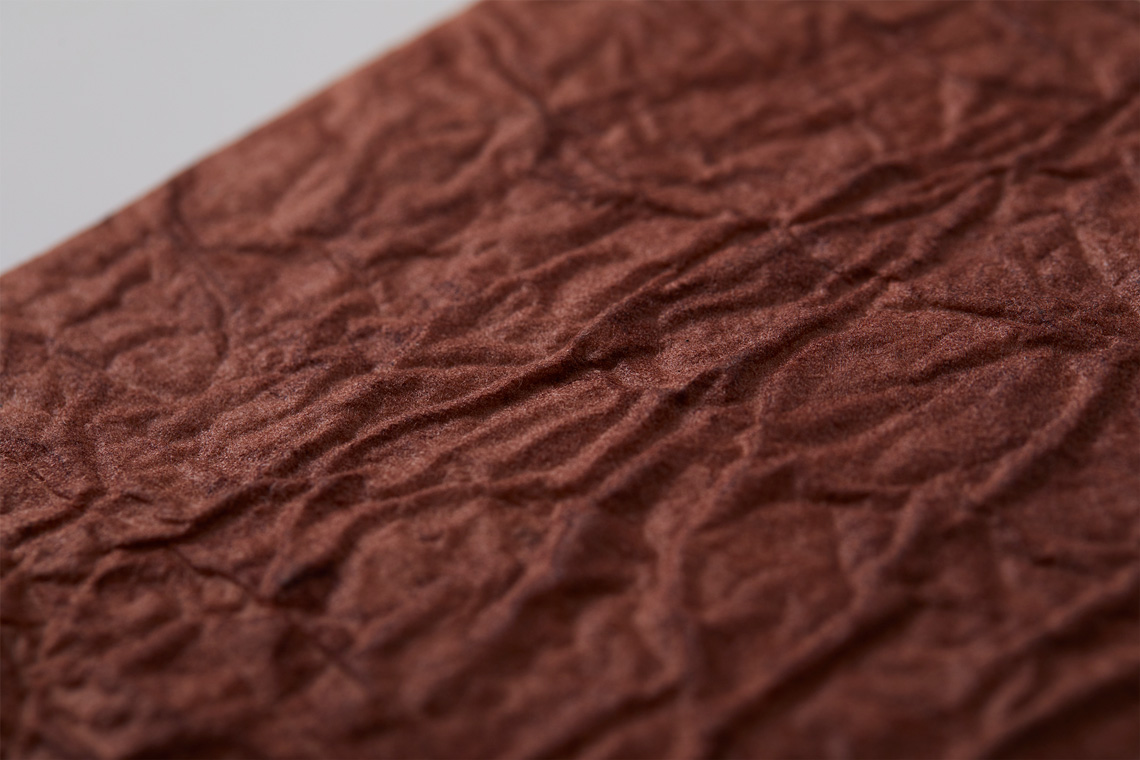 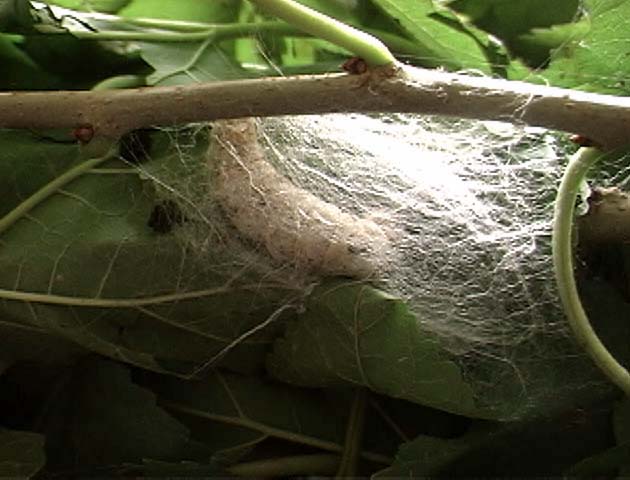 Knowing that leather production has a lot of environmental impact, I decided to research and develop the "Gikakumayu" as an alternative. 【It takes a lot of chemicals to tanning leather and a lot of water to wash off the chemicals. （Most natural leather products are made from the skins of livestock (cattle, horses, pigs, sheep and goats) for meat purposes.And it has a role to play in reducing itself. However, from the 1,000 kg of salted hides provided by the meat industry as raw material, only 165 kg of the final product is available. In addition to the large amount of solid waste and cuttings, 40 tons of wastewater is generated per 1,000 kg of salted hides during the processing process.／I quoted from the internet. ）】

I've come to wonder what kind of fashion would make people all over the world happy. I don't want to put as much of a burden on animals, plants, people and the earth as possible. One of the features of Mayuya's "Gikakumayu" is that the sub-silkworm yarn can be reused. And the greatest advantage is that Gikakumayu does not use chemicals or large amounts of water. It is truly an eco-friendly man-made leather. Translated with www.DeepL.com/Translator (free version)

Enjoy the functionality of silk with moisture retention, softness, luster and elegance, the only alternative to leather.
Finally, "Gikakumayu" is like a heavenly woman's robe of feathers. And silk is small is beautiful.

【About the ingredients of "Gikakumayu"】
When pulling the raw silk out of the cocoon, the thread ends are first found.
At that point, the top layer of the cocoon that does not become a fine thread is removed.
These are collected and made into "kibiso" yarn.
”Mayuwata” is a boiled and decomposed version of the ”Degaramayu”.
"Degaramayu" is a generic term for "koboremayu", "Chumayu", thin-skinned cocoons, perforated cocoons, etc., that have failed to pull the thread to the end. ("Chumayu" refers to cocoons whose surface is soiled with silkworm urine or other substances.) 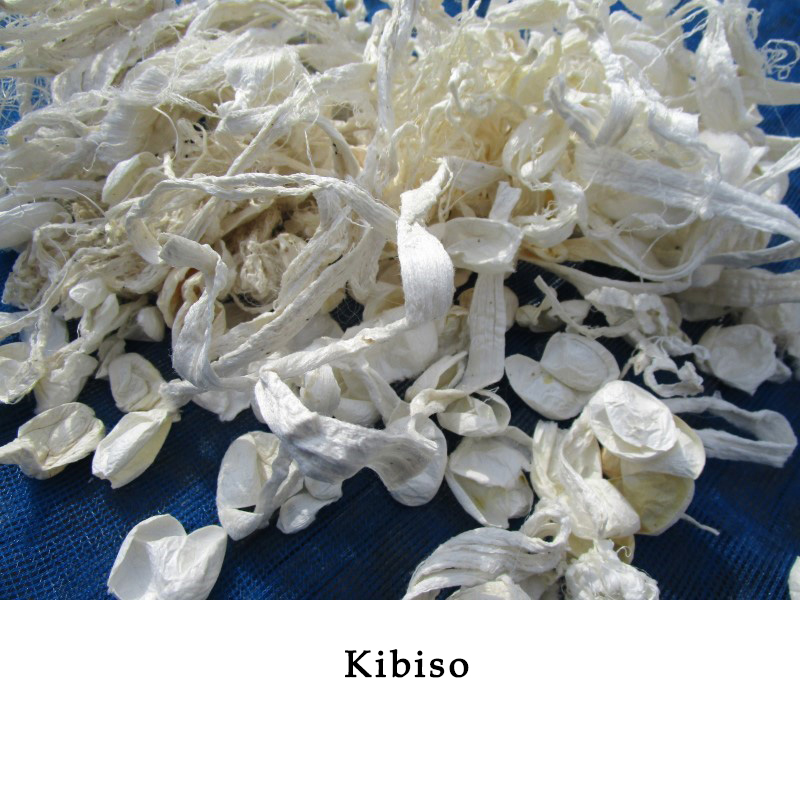 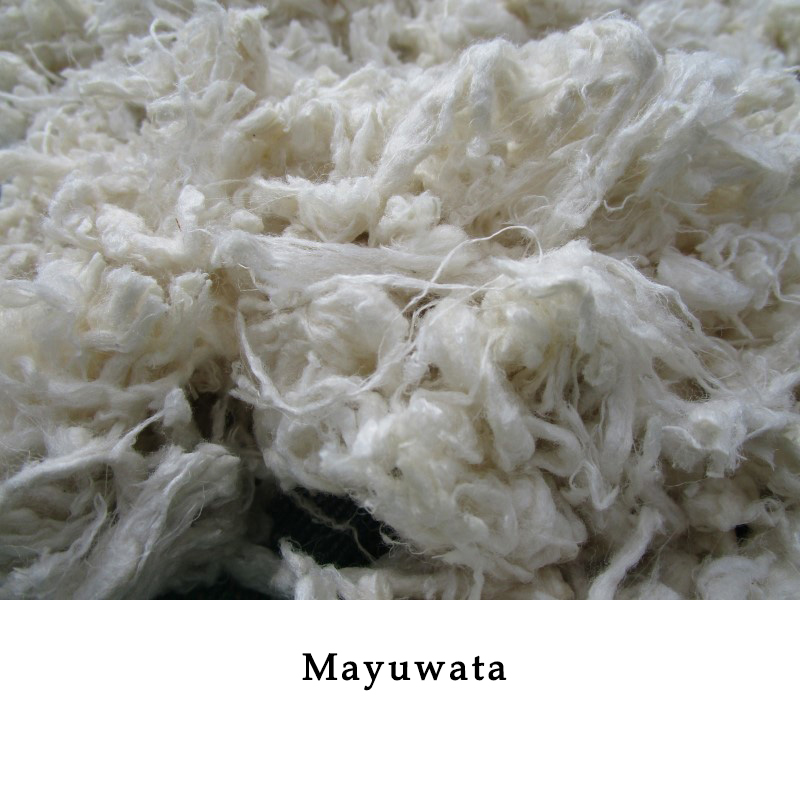 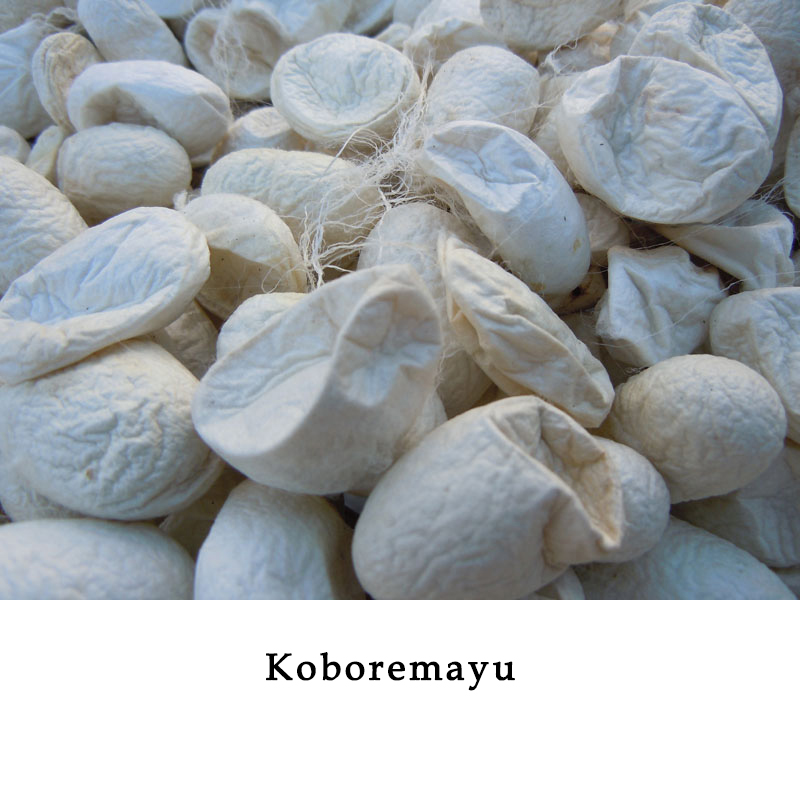